This work is unique in several ways. It marks the first time that United Methodist Communications has coordinated with Deaf United Methodists to produce information available on the UMC.org website in ASL.

Each video includes sign options and the meaning of the term in American Sign Language. Individuals who are Deaf, communicating in their primary language, present all of the terms. All terms are ASL translations of the glossary, as defined by The United Methodist Church.

The initial phase was published with translations from the United Methodist glossary. It was funded in part by a grant issued by the Deaf Ministry Fund. The Deaf Ministry committee is part of the Global Health unit of the General Board of Global Ministries. 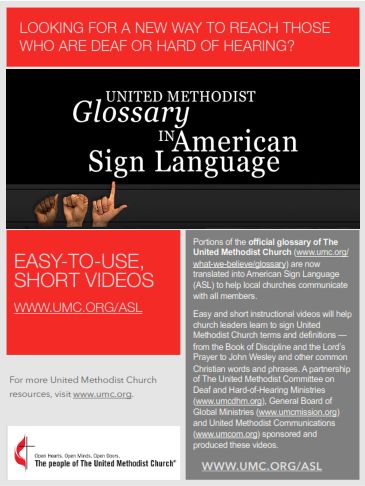 Using the ASL glossary in a class setting